Going on a road trip gives two people a lot of time to talk. Since Bill is an industrial chemist we started talking about chemicals used in food production and cosmetics. (We're an exciting couple aren't we??)

The upshot of the trip was that we've decided to become an organic family. Now, as this is still a fairly new concept to me I did what I have always done, I dived in feet first.

I proceeded to research all I could on the subject but I have started with cosmetics as Bill is familiar with the ingredients in these items and offered good advice.

He gave me a list of ingredients to avoid.

Here they are ( in case you are interested). I've given you the scientific name and what it may be called on packaging, what its used for and what research has shown it can do to animals and humans.

DIETHANOLAMINE (DEA) Used to make soaps and shampoos lather. Reacts with other ingredients below to form a carcinogen. Companies use the names cocomide, oleamide and lauramide on product labels.

FORMALDEHYDE A known carcinogen. Irritates eyes, nose and throat. Used in many products for shelf life.

PHENYLENEDIAMINE (PPD) Used in hair dyes and is a carcinogen.

SLS's (Sodium Lauryl Sulfate and Sodium Laureth Sulfate) This was in almost everything I owned. It makes stuff like shampoo and soap foam. Residue of these chemicals have been found in the brains, livers and hearts of cancer patients (on autopsy).

TOULENE In nail polish and hair dye. It's toxic to the nervous system and high exposure has been linked to birth defects and miscarriages.

TRIETHANOLAMINE (TEA) used to balance Ph. Causes allergic reactions and is an irritant to eyes and skin. Is absorbed and stored by the body to toxic levels.

HYDROQUINONE It's already banned in Japan and other Eastern countries. It's used for bleaching and is in creams used for skin and age spots.

ALUMINIUM - Used in deodorant to retard perspiration. It clogs up your pores so the perspiration can't get out.

Ok, so if I haven't lost you yet, I went through my bathroom and collected all the products I had that contained these ingredients. All into the bin. See picture one. 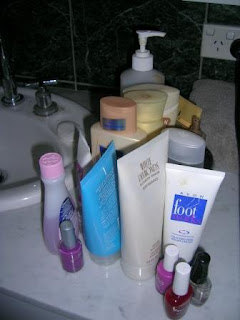 Then I found a good organic store and replaced it all with Australian certified organic products. I still checked the ingredients though. Some companies have seen the dollar signs in organic products and have jumped on the band wagon without changing their ingredients.

I have still to replace my make-up but I have the name of a good company who specialise in organic make-up and I plan to investigate their range. My bathroom now holds these products. See picture two. 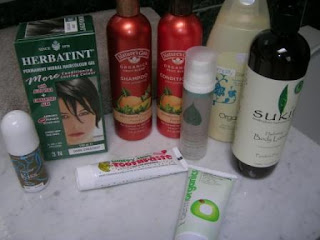 The products are not that much more expensive if you shop around amd I feel great knowing that I'm not putting toxic chemicals on myself or my little six year old.
Posted by Vanessa at 1:07 AM

I never knew these things.

I will be going through my bathroom products and cosmetics to sort through what needs to get thrown out.

It will probably take some time and research to find appropriate replacements.
Non Consumer Girl

Great post Vanessa. I'll have to go through my cupboards and look for these ingredients. I do have some organic products - probably about 60% of what I use. I love Locatain
e for skin care - they aren't organic but are pretty natural and have a great company philosophy.

I already started doing this last year, and now I own pretty much everything paraben and (all the above chemicals) free..

Sephora is a great resource for creams for the face btw..

Wow, Vanessa - it pays to have a chemist for a husband! Thanks for posting these items we need to avoid. I didn't realize we were putting so much junk onto our bodies, faces and hair. I'm gonna look through my products and see what I can get rid of. I've been ordering natural soaps and lotions but methinks I should look into the hair, make-up, and cleaning products, too.

You're so sweet to comment about my little farmhouse! Thank you!

Wow girls thanks for the feedback.
I've been out "sourcing" some stuff today. For those in Australia I've found a lot of stuff at Priceline. Otherwise look for your local organic shop. We have a lot of organic produce deliverers here too. You can order a box of mixed organic fruit and veg for around $40 and then you can add in other stuff they sell too. Some of them do cosmetics.
I have found one company called Miessence (where would we be without Google?) that does cosmetics but I am going to find a local rep as I like to try before I buy.

Great post Vanessa. Thanks for all the useful information.

For everyone planning to make the switch, please remember to recycle whatever containers you can. In the USA, Origins stores will take ANY cosmetics containers and recycle them for you. I don't know if they have a store in Australia, or if some company does it there.

YAY! Good job! That is awesome. Soooo good for you. I actually make most of my products! On my blog, I have recipes for shampoo, toothpaste, and many other beauty products. :)

My blog is http://www.ultimatemoneyblog.com if you want to check it out. :)

Thanks Mrs Money. I now have you in my favourites.

I just want to let you know how much I enjoyed this post. It motivated me to reevaluate my cosmetic purchases and do a blog post of my own. Thanks for the inspiration!

It's scary to be unable to read most of the ingredients on the back! So far, my make up is the only part that's not natural/organic. Yes Miessence does great natural alternatives, I haven't tried their cosmetics yet and another great natural brand is Sodashi. Thanks for the informative post! 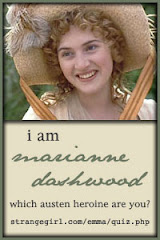 Vanessa
This blog chronicles the life of Vanessa and her family as they enjoy the simple life. It is about how we are moving away from consumerist pursuits and goals to embrace a more meaningful and fulfilling existence

How to get happy